Disappointed on interference from the Executive over the passing of Islamic Family Law (Federal Territories) (Amendment) Bill 2005. 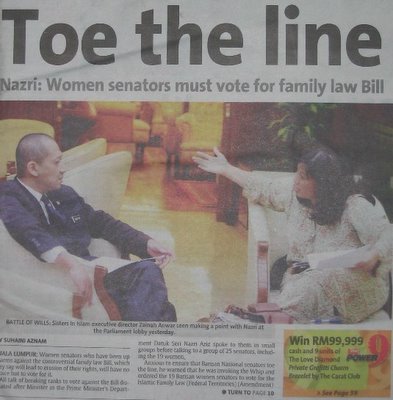 It is deeply regret to learn that 16 women senators who opposed the Islamic Family Law (Federal Territories) (Amendment) Bill 2005 were directed by the Cabinet and the Minister to vote for the Bill in the Senate today.

Minister in the Prime Minister Department, Datuk Seri Nazri Abdul Aziz has been quoted in today’s NST page 19 as:

”I am using the word ‘directed’, not ‘advised’. If the word ‘advise’ is used, the senators have the option of not passing the Bill, but when you are directed, you must pass it.”

Although Nazri has mentioned that “they should take heart that their grievances will be studied”, but DAPSY is very disturbed with his authoritative remarks that Senators are ‘directed’ to pass the bill regardless of whatever stance or grievances they have on the Bill, which is a clear sign of erosion of the doctrine of power separation among the Legislative, the Judiciary and also the Executive when he is quoted as directing the senators to pass the bill, and even warning to invoke the Whip to order the 19 BN women Senators to vote the bill.

The Cabinet must consider the views of women's groups and review the Islamic Family Law (Federal Territories) (Amendment) Bill 2005. The Cabinet must also allow Members of Parliament including Senators to vote on the Bill according to their conscience.

It is important for the Cabinet to consider the views of the women's groups, women MPs and women Senators, and view seriously the negative and far-reaching implications of the Bill as described in the today’s The Star page 10.

In view of the strong stance from Members of Parliament from both Houses of the Parliament, the Government should withdraw the Bill and set-up a Parliamentary Select Committee to review the bill before it is re-tabled next year.