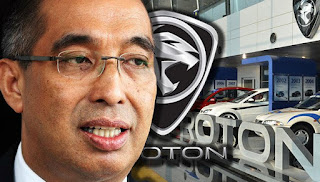 Salleh and MITI must explain to Malaysian, in an increasingly competitive automobile market, how the federal government is going to assist Proton to remain competitive?

Is Salleh suggesting that the government should abandon Proton to the winds of the free market economy despite heavy investment from the government?

Does this not seem like an easy way to cut costs and let our flagship automobile brand dying from exposure to the free market?

Is it exactly true that a Japanese and a German do not necessarily buy their home brand vehicle when majority of the Japanese and German bought their local brands?

Is Saleh also suggesting to the Federal government to abandon Proton as its official cars due to the fact that Proton is uncompetitive?

If so, what was all the fuss about unpatriotic behaviour when the Opposition-run states decided to abandon Proton cars as official cars?

Finally, how is the Federal government going to boast the usage of public transportation with higher fares, cheaper cars and cheaper fuels?

The answers to these questions are not easy but Salleh and the entire Cabinet must have the gut to deal with the issues rather than using it to score political potshots.