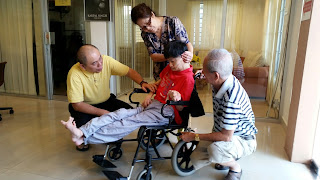 ic son for 47 years have alleged that he was brain damaged after a teaching hospital in Petaling Jaya gave him a smallpox vaccination.

Low Hon Hong, 75, and his wife Chua Ngan Cheng, 70, believed that it was the smallpox vaccination the day after their son Low Chee Min’s birth in 1968 that caused him to have brain damage.

“He was born at about midnight, and the next day they gave him two injections: for smallpox and a BCG (for tuberculosis). A week later he falls sick, his body was yellow and he was admitted again,” Chua said, adding that her three elder children did not receive the same smallpox vaccination.

“I did not know any better then. I was young, but doctors now say that it may have been that injection that changed my son.

“He was too young for the vaccination, they should have only given it to him when he was older,” she said.

Chua said that when her son was admitted, doctors operated on him on the top of his thighs to perform a blood transfusion.

“I did not know what they were doing, I just kept crying because he was in so much pain. One of the doctors there told me it was better if they let him die, because he would end up being brain damaged.

“But how could I allow them to let him die? He is my son and I love him,” she said.

Chua said that it was when consulting a doctor years after her son’s birth that he advised her to seek a Singapore specialist’s help.

“My son was about five or six years old then, and he told me to go to Singapore, but we didn’t have money to do that,” she said.

Both Chua and Low now fear that they may need more help with their son because they are getting too old.

“I can’t lift him up anymore, I hurt my back the last time I tried and I am getting older, so that is why I need a helper now,” Chua said.

Chua said that she had asked for assistance from the Ministry of Health around two years ago but was turned away.

“I wanted to see the minister, but the man told me he was not there. He told me that if they give me money for my son, it would be admitting that they did something wrong.

“However, the man said the ministry would give my son free help by sending a helper but nothing was done,” she said.

Kampung Tunku assemblyman Lau Weng San told reporters at his office that he had previously written to both the Health and Education Ministries but to no avail.

“This is because a medical negligence suit needs to be filed within the first six years of the child’s birth,” he said.

“It is difficult for them now because they are both retired. It was when their son was growing up and was about five or six years old when they found out what really happened, but it was too late.

“Now that they are older, they need help,” he said.

Lau said that if any members of the public were able to provide medical advice, assistance or donations to the family, they could contact him directly. – July 19, 2015.