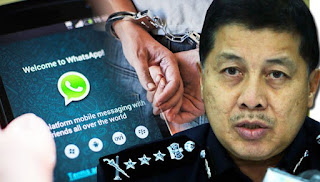 Malaysians are outraged when Johore police yesterday arrested a 76-year old senior citizen was arrested in Kampung Tunku yesterday for an offence under section 233 of the Multimedia and Communication Act 1998.

The senior citizen was arrested for allegedly sent an offensive image of Prime Minister Najib Abdul Razak under the name “Pa Ya” in the WhatApp group “Bicara Politik Melayu”. It seems to us that the oppressive nature of Najib’s regime has shown its true colour since the break out of his RM4.2billion scandal.

Cabinet ministers, UMNO leaders and government officers including top law-enforcers who work against him are sacked and removed from their positions. Political dissents, social activists, artists and even ordinary Malaysians, in this case a 76-year old, are subject to intimidations, persecutions and selective prosecutions.

It is sad and no doubt that freedom of expression in Malaysia has gone downwards.

What Najib and his coterie of advisers should concern is why there has been a constant flow of critics against him despite the constant harassments and persecutions against his critics since the break out of his RM4.2billion donation scandal?

What they must do is addressing the message of his critics instead of harassing and persecuting his critics. It would be more beneficial for Najib and his coterie of political advisers to ponder these questions.

If after due deliberation, they still object to the wrongdoings of his critics, then Najib should institute civil suit against them for defamation proceedings, instead of abusing the processes of the law and his office as Prime Minister to harass and persecute his critics.

I will offer my assistance in any way I am capable to this 76-year old senior citizen. I have already informed community heads to assist me in this. One must remember that Kampung Tunku is largely a residential area consists of mainly Malay elites, professionals, corporate figures and retired senior government servants. Many of them were former director-generals of various government departments, ministry secretary-generals, deans or vice chancellors of public universities etc.

If any Malaysian were to criticise the government, one will expect that residents from Kampung Tunku will be the least critical amongst all. To know that there is a 76-year old senior citizens expressing his strong disapproval against Najib and the government openly speak volumes about the low level of confidence the people has in Najib’s administration.