Why tax breaks for Bandar Malaysia when millions of genuine Malaysians have to pay taxes? 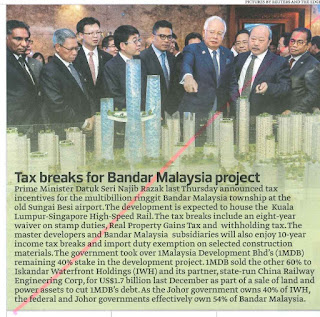 I find it enormously absurd when the Federal Government lately announced that there will be various tax breaks for Bandar Malaysia projects when millions of genuine Malaysian housebuyers and vendors have to pay various taxes when they transact.

The multi-billion ringgit Bandar Malaysia township is located at the old Sungai Besi Airport. The development is expected to house the Kuala Lumpur-Singapore High Speed Rail. The tax breaks include an eight-year waiver on stamp duties, Real Property Gains Tax and withholding tax.

In addition to that, the master developers and Bandar Malaysia subsidiaries will also enjoy a10-year income tax breaks and import duty exemption on selected construction materials.

Therefore, it is equally absurd when the master developers of Bandar Malaysia and its subsidiaries are entitled to various tax breaks while many other developers, many of them are medium-size developers are unable to enjoy such tax breaks.

Such tax breaks will only benefit those who are already very rich, including potential foreign investors and buyers from China and other countries, while many other Malaysians vendors, housebuyers and small and medium-scale developers have to pay diligently their fair share of their taxes to the Federal Government, on time!

Why such preferential treatment to Bandar Malaysia? Is it because of the fact that the Federal Government has taken over the 1MDB's remaining 40% stake in the development project? (1MDB sold the other 60% to Iskandar Waterfront Holdings (Johore state government hold 40% of its share) and its partner, state-run China Railway Engineering Corp, for US$1.7billion last December as part of a sale of land and power assets to cut 1MDB's debt).

Will the government mandate the developers to build sufficient percentage of low cost and affordable homes for city-dwellers in Bandar Malaysia? Or it will become another hideout enclave for the super-rich community?

This is another example of how the fiscal policy of the Federal Government misplaces its priority.