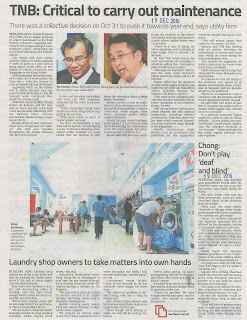 I was taken aback by the statement from MCA Youth Chief Datuk Chong Sin Woon published by The Star on 19th December 2016, in which he attacked the state government of Selangor for playing the “deaf and blind” game in turning away the advices from the public to defer the proposed water.

Ironically, the same media on the same page has published another statement from his counterpart from Gerakan, ie the newly appointed National Water Services Commission (SPAN) Chairman Datuk Liang Teck Meng, also MP for Simpang Renggam, who said that the timing of the shutdown was agreed by all parties and the decision should not be politicized.

Also appearing in the same article are TNB chief corporate officer Datuk Roslan Ab Rahman and TNB vice-president (distribution) Datuk Baharin Din, whom I believe had given a very detailed press conference about the proposed shutdown of their substation in Bukit Badong, which is the only cause for the shutdown in Air Selangor’s water treatment plants in along Sungai Selangor.

Perhaps Chong Sin Woon should first consult with his counterpart from SPAN, Datuk Liang Teck Meng before coming out with such a populist statement. He may be from a different political camp but he should ensure that all his points are factually correct as to the reason of the major shutdown.

While I believe that SPAN should have also clarified further if such works can be done earlies in December or even in November, Iooking from the clarification given by Datuk Baharin Din who revealed that two major hotspots were spotted in a thermal scanning, there is indeed no reason to further delay the shutdown.

It is also unfortunate that Datuk Baharin also said in the press conference (reported at http://www.astroawani.com/berita-malaysia/senggaraan-tnb-hanya-16-jam-syabas-hentikan-bekalan-air-4-hari-126044) that there are two reasons that makes it virtually impossible to provide gen-sets to generate sufficient power to temporarily operate the water treatment plants and I quote the verbatim as reported by Astro Awani:

I do hope that Chong Sin Woon would not play to the level of Jamal Yunos was today at the Selangor State Government, demonstrating against the water-cut in a bathcloth. Let’s be honest politician and not be a political clown.