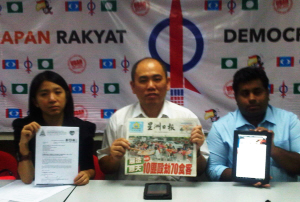 PETALING JAYA: Three state assemblymen from Petaling Jaya have urged the Inspector-General of Police and the Home Minister to approve the city’s application to employ auxiliary policemen.

Damansara Utama’s Yeo Bee Yin, Kampung Tunku’s Lau Weng San and Bukit Gasing’s Rajiv Rishyakaran said the authorities had shown reluctance to do so despite knowing that Petaling Jaya was suffering both a shortage of policemen and a rising crime rate.

According to Yeo, the Petaling Jaya City Council submitted its first application to the IGP in February 2009 but received a rejection letter only in March 2010.

“It took a year for the then IGP to reply,” she said.

“Since we re-applied in June 2012, we may get a reply soon. We urge the current IGP to approve the application.”

Petaling Jaya currently has one policeman for every 470 residents whereas Interpol guidelines recommend one for every 250 residents.

Yeo said she was not satisfied with the March 2010 rejection letter, in which the former IGP said there would be a conflict of duties between the Royal Malaysian Police and the proposed auxiliary force.

“They should have explained to us in detail the reasons why they rejected the proposal,” she said.

Lau said the crime rate in Petaling Jaya was worrying enough to merit serious attention to the proposal.

“Break-ins and robberies are ever on the rise,” he said.

He disclosed that the Selangor government had set aside RM4.3 million to kick-start the auxiliary policing programme.

“We just need to get the IGP and Home Ministry’s approval,” he said.

“We will provide the salaries, equipment and uniforms.

“There is no politics in this. We just want to help the police get the job done. We want to relieve them of some burden.”

Rajiv accused the IGP and Home Minister of applying a double standard in rejecting Petaling Jaya’s application, noting that they had readily approved an auxiliary police force for Kota Iskandar, Johor.

“This is an insult to PJ residents,” he said.

“Kota Iskandar residents have adequate police officers. Yet they also have auxiliary policemen. Why the double standard? Why are they depriving PJ residents of safer streets?”