Send OCPDs back to school again 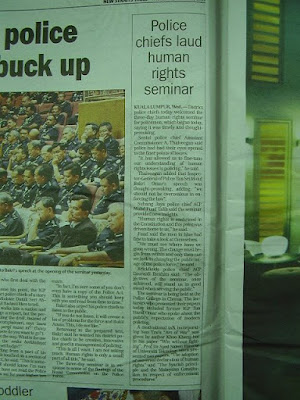 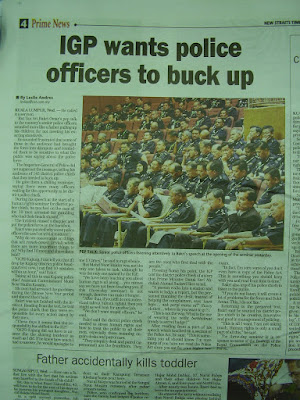 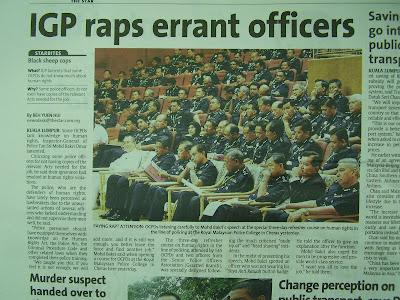 I was on my way rushing to Pandan Indah yesterday and in fact I was late to the candle light vigil.
In the midst of rushing to the event, a friend sent me a message that Jenice and others were arrested.
It was another blatant attempt by the police force to breakup peaceful gathering organized by peace-loving individuals and elected representatives.
When journalist A. Kadir Jasin tried to cover the May 7 Perak State Assembly Sitting, he mentioned this in his blog “The Script” on 7th May:

Perhaps this could be correct, that this is what has been practiced by the police force, that when there is an order from the top, they have to obey and carry it out without any doubt.
But let’s take a step back, aren’t the police force part of human being too? Orders, not matter how strict it is, must adhere to the principle of respecting human rights.
Nonsensical arrests that the police made since 7th May only deepens the impression from the general public that this country has slowly turned to be a police state, no different from the Gestapo in Nazi’s Germany, the KGB during Soviet Union’s time and the many Secret Polices in Eastern European countries during Communist’s rule.
The recent spate of nonsensical arrests remind me of what former Inspector-General of Police (IGP) said three years ago in a Human Rights Seminar organized by the police force targeting at Officers-In-Charge of Police District (OCPD).
Below are some quotes by former IGP, Tan Sri Bakri Omar, the predecessor of current IGP, Tan Sri Musa Hassan:
From The Star dated 2nd March 2006:

“Police personnel should have equipped themselves with knowledge on the Human Rights Act, the Police Act, the Criminal Procedure Code and other related laws when they completed their police training.
“We taught you this, if you feel it is not enough, we will add more; and if it is still not enough, you better leave the force and find another job,” Mohd Bakri said when opening a course for OCPDs at the Royal Malaysian Police College in Cheras here yesterday.

Bakri was puzzled why some police officers focused on trivial matters.
"Why do we concentrate on things that are remeh-temeh (trivial) when there are more important things to do? Why find 10 men and shave them bald? "OCPD Kajang, I can tell you that if I drop by Kajang (district police headquarters) now, I can find 10 mistakes within an hour," said Bakri.
But Mohd Noor Hakim was not the only one taken to task, although he was the only one named by the IGP.
"We have been teaching you about human rights all along ... you cannot say we have not been teaching you. If this (three-day seminar) is not enough, then we can make it longer.
"After that, if you still do not understand (about human rights), then you might as well look for another job.
"We don't want stupid officers," he said.
Bakri said the district police chiefs needed to stress human rights and how to treat the public to all their men, especially those manning enquiry desks and patrol cars.

I think what Tan Sri Bakri Omar said three years ago are some very good reminders not only to us as general publics but also to the current leadership of the police force.
Perhaps it is time for OCPDs to be sent back to school for such seminars again. Afterall, these seminars which Tan Sri Bakri Omar attended was held in Cheras Police Training Centre (Pulapol).
It must be a very different feel if OCPDs were to be sent back to school again.

You should draft a "Re-admission of Police Officer Bill" and table in the Parliament when PR capture the Federal government. Hope this bill will finally become an Act of Parliament!

Re-Admission Police Officer Act, 2012 - For the treatment of The Royal Malaysian Puppy[Police recruited prior to New Police Training School]

When PR take over the federal gov, PR will set up new Police Training School for recruitment and training of new polioce office.

This new training school will be headed by foreign expatriate such as UK, US, Scotland & etc. An independent panel which reporting to Parliament will be set up to monitor the training school.

The new program will be specificly design to take over the administration of existing Royal Malaysain Puppy.

The existing Royal Malaysian Puppy will still have the opportunity to join this new training school if they "pass" a custom design evaluation test! Then, they're required to "sign" a "re-admission" agreement with PR.

Royal Malaysian Puppy are just like the "Fucking Police" in Hong Kong in 60-70s.