Update on Sungai Way Deepavali Bazaar - Will the twelve PJ councillors or Mayor care to respond to the real complaint of Sri Sakti Eashwary Temple - to close down the night market next to it?

Update on Sungai Way Deepavali Bazaar - Many armchair critics have mentioned that the new site was not agreed upon by the committee of Sri Sakti Eashwary Temple. The mayor was quoted in a news report that one of the reason why he allows the old site at Jalan SS 9A/13 to be reopened was because of the disagreement from the temple.

Councillor Mr Sean Oon​, had actually spoken to the Secretary of the temple and discussed over the idea of having the Deepavali bazaar at Jalan SS 9A/12. There was no such disagreement recorded to him. There were some issues when some of the "petak" were drawn too close to the entrance. Therefore the council had redrawn the shifted the "petak" further away from the entrance of the temple.

That is also the reason why we see road marking in black used to cover the earlier road marking. We should have documented the conversation or meeting with the rightful representative from the temple (though the parking lots outside the temple are the council's property). We did not do it. It was a mistake.

However, I did tell some of these critics that, if the temple has any problem with the 11-petak Deepavali Bazaar, the temple will have a bigger problems with the weekly Pasar Malam, weekly pasar tani and yearly Bazaar Ramadan, in particular the weekly pasar malam every Monday night. This is because these markets are all bigger and are occupying most of the parking lots located just next to the temple on a piece of vacant land.

The temple has complained numerously to the council that they could not have any event, ie wedding dinner on Monday night when the ample parking lots located just next to the temple are almost taken up by traders. Mr Sean Oon had tried to shift the market slightly away from the temple to allow at least some space for parking the to clear the entrance to the parking lots from any blockade but to no avail.


Today, I have the chance to read the letter they sent to Mayor dated 16th October, some five days ago and my points are proven. They have one paragraph complaining against the turmoil  a day before they sent the letter to Mayor (which was not caused by us anyway), one paragraph, of course, against the setting up of a bazaar "in front" of their temple (and I maintain that it is not exactly in front of their temple but it has been moved slightly northwards from the entrance), and the remaining THREE paragraphs are against the night market. They asked the Mayor to CLOSE the night market! 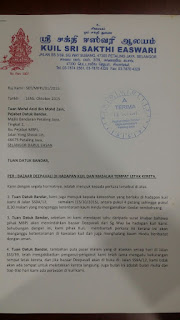 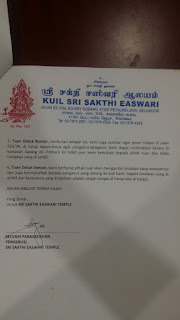 Of course this is a stand which I am not going to take without full consultation with all stakeholders but the question I wish to ask is: Will those twelve councillors who signed the memorandum care to respond to the real complaint from the temple?

If they are sincere in responding to the views of the temple, may I ask them to write to the Mayor and call for a meeting to discuss this matter too?

Can the Mayor, on his own initiative, call a special meeting to discuss this?