The Thais are catching up! 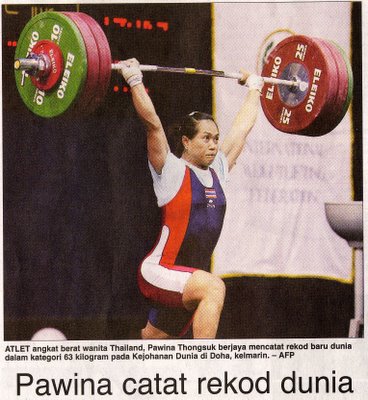 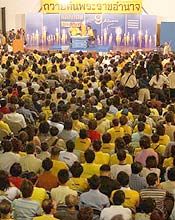 (Ten of thousands of people attend the ‘Muang Thai Rai Sapda’ show by Sondhi Limthongkul at Lumpini Park after reports that the government would shut down his website and his programmes on cable television.)

It was another day in Malaysia and things were certainly quite different in Bangkok yesterday when thousands of Thais yesterday moved to Lumpini Park in Bangkok to listen to Sondhi Limthongkui’s rally against Thai PM Thaksin. Those who couldn’t make their way to Lumpini Park stayed in their home and watch the live telecast from ASTV1 cable channel broadcast via satellite.

Sondhi, boss of the Manager Group, has launched what seems to be a solo campaign to oust Thaksin’s dictatorship. He first banked on the theme of “Fighting for His Majesty the King” to create a movement to oust the Thaksin regime and to write a new constitution. He has been now shifting his strategy of exposing the government’s conflicts of interest via business dealings and shady privatisation deals.

The government’s attempt to silence Sondhi from slamming the premier has been futile in the face of new, sophisticated technologies that are proving to have a profound impact on the Thai political landscape.

The government may control the broadcast media, but it has yet to effectively control the proliferation of the local cable news networks and the Internet, which has become a fertile ground for anti-Thaksin campaigning.

While you can read more from


The Nation, one thing that I am certainly sure is that such gathering was a rare occasion on Malaysia. Are Malaysians not brave enough to voice out their dissatisfaction against government irregulaties and unjust in this nation? Or Malaysians are too generous that they can easily forgive the authority?

Civil awareness is always directly proportionate to how advanced a country is, although this is not a scientific way to measure it. But the high civil awareness of Thais has already proven that they are on the right track to overtaking their neighbours – The Malaysians – in more areas in time to come.

Opposition leader yesterday has blogged that “Thailand is fast catching up from behind, having edged out Malaysia in automotive industry and established itself as the “Detroit of the East”. The latest bad news for Malaysia is that for the first time also, Thailand’s Chulalongkorn University has bested University of Malaya in the World’s Top 200 Universities Ranking!

Thailand is now challenging Malaysia on IT and if we do not watch out, Thailand may one day even beat Malaysia in the population’s mastery and use of English, the international language, a notion which would have been completely unthinkable two, three decades ago.”

With this, I remember last year when I was working in a Malaysia-Thai JV gas platform offshore Kota-Bharu/Songkhla when I was first alerted of the openness of Thai Media, I immediately had an instinct that the Thais are catching up. Immediately when I came back, I have shared this views with others and some of my friends commented that the Thais are still lagging behind in terms mastery and use of English, which is a major stumbling block for Thais to move any further to overtake Malaysia.

Within one year, the Thais are moving fast. And they almost outdo us in almost every aspects. Look at sport, Thai female weightlifter, Pawina Thongsak created three world records (snatch, clean & jerk and mixed events) in World Weightlifting Championship in Doha on Saturday. While we are still dreaming for our first Olympic gold metal, the Thais have already grabbed several Olympic gold metals and Pawina is one of the Thai gold metallist.

Do you know the Thais are catching up?