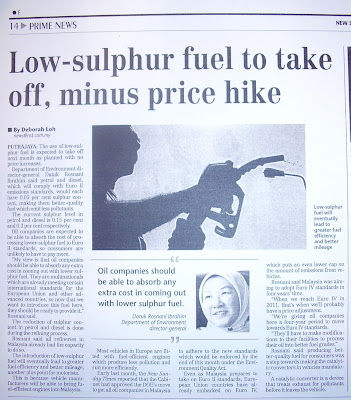 The Director-General of Department of Environment Datuk Rosnani Ibrahim tow days ago commented in News Straits Times that low-sulphur petrol and diesel with 0.05 percent of sulphur which comply with EURO II emissions standards will be available next month.

Government assurance in early January 2007 that there will be no price hike for petrol and gasoline is equally meaningless as the valid concern of motorists today is not about the government is going to increase the price or not, but of whether the government is ready to cut the price to reflect it’s actual level in international market as what the government justified when oil price was increased one year ago.

Although the introduction of B5 biodiesel (5 percent palm oil mixed with 95 percent diesel) is much lauded when it was launched in mid 2006, there has not been much improvement except that the production of biodiesel is mainly to serve foreign markets. Worst still when there are only five companies out of 90 companies are active biodiesel production companies.

This is not quite encouraging when the fuel has not been able to be marketed in domestic market to serve as alternative fuel for motorists. Is the government more interested to market the fuel in oversea markets rather than benefiting domestic motorists with more affordable and cleaner fuel?

The question is clearly not so much on the quality of the fuel we use but more on the right-to-choose we have as consumers and motorists.