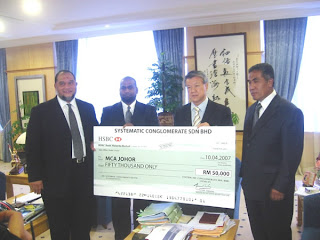 We also received a mailed-complaint that the tender offered by a bumiputera company to supply, install, test, commission and configure IT equipment (Total Hospital Information System Phase 2) for Selayang Hospital was cancelled by the Selangor State Health Department as the Division of Procurement and Privatisation of the Ministry of Health had in a letter directed to the Selangor State Health Department informed that another company named Systematic Conglomerate Sdn. Bhd. had appealed to the Ministry and was granted the contract to provide operation and back-up service as well as to upgrade the equipment, software and maintenance of Selayang Hospital Total Hospital Information System (THIS) for 3 years with the option of another 3-year extension with effective from 1st September 2007.

From the complaint we received, the tender was called by the Selangor State Health Department and several bumiputera contractors offered their tenders.

It was later intervened by the Ministry of Health and the whole tender process was suspended and the Selangor State Health Department issued letter to all bidder to cancel the tender.

It was unfair for the bidders as they have already submitted their quotation with the hope of securing the project when the tender was cancelled when another competitor stepped-in and appealed to be granted the project.

Such happening reflects very poor on the transparency and integrity of the government.

It is even more shocking that a photograph was also provided that features the Executive Chairman Dato' Amanullah Mohamed Yusoof and Managing Director Haji Wan Azhar Ali of Systematic Conglomerate Sdn. Bhd. presenting a mock cheque of RM50,000 to MCA Johor on 10th April 2007.

We will write in to the Auditor-General to request him to carry out a proper audit on the whole tender process in supplying, installing, testing, commissioning and configuring IT equipment (Total Hospital Information System Phase 2) for Selayang Hospital. We will also consider lodging a report with ACA but for the first step, Health Minister should come clear to explain all this.

Boleh land..Previously they lobby NMYAKOB (GENG GENG) to secure the deal and just to get the LOI. Now it is proven that their service sucks and even ministry is seeking other players to be in and opening tender for other new IT hospitals.


They dare to play this dirty game and the Govt allowed it to do so.

If this continue to happen in this country, ofcourse FDI will not come in and we are loosing in a big picture overall.