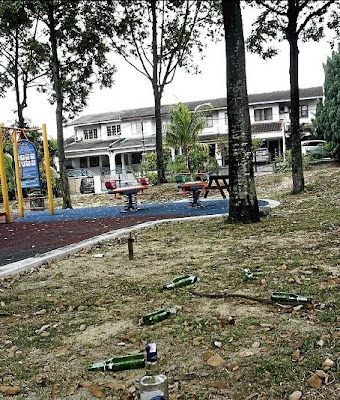 ON THE RISE:Criminals are more daring and crimes more rampant in the formerly peaceful neighbourhood of SS1

FOR decades, the SS1 community in Kampung Tunku lived without much worry about the peace and safety of their neighbourhood.

They could leave their gates unlocked and walk the streets without fear, although there were cases of petty thefts such as stolen shoes, but they were unfazed until recently.

Crime has become more daring and rampant in the neighbourhood, said the residents, with the latest incident occurring in Jalan SS1/17 just last week.

Lab technologist R. Saraswathi said her house was robbed by two men at 3.30pm, when her elderly mother and a 50-year-old sister were at home.

"A robber jumped into our compound by first getting into our neighbour's compound as their front gate was unlocked. He then managed to open our automatic gate. The two robbers then bent the grilles on our gate, crawled under it and entered the house.

"They tied my 75-year-old mother up, bundled my sister aside and threatened them with a dagger. They ransacked the house and it was all over in 15-minutes. They escaped with our laptops, jewellery and money, all worth RM20,000," said the 55-year-old, adding that no one was hurt in the incident.

Since then, Saraswathi said they have beefed up security in their home by installing more grilles.

John Fernandez was robbed while he was about to drive into his porch last year.

The 82-year-old said the robbers snatched his gold chain while his wife was held at knife point.

Fernandez said a visiting friend was also not spared as he was robbed twice of his gold chains, the second incident being six months ago.

"We are living in fear and we hope for more police presence here," said Fernandez, who moved into the neighbourhood in 1967.

There have also been cases of thieves using new "tactics" to steal belongings from homes.

Lum Weng Wah said thieves had jumped into his compound and dismantled a bamboo pole from the clothing line.

Attaching a hook from a clothes hanger to the bamboo pole, the thieves then used it to fish out belongings through a window.

The advertising agency owner lost his laptop which was placed on a table near the window. He discovered the loss upon seeing the "innovation" the thieves had left behind.

Residents' representative, Johnny Quek, said they were worried about the rise in crime in their area, especially with the majority of victims being senior citizens and the robbers striking in broad daylight.

"Our children are out at work during the day, leaving us, the elderly and grandchildren at home.

"We haven't had a good night's sleep as we worry that we will fall victim to these criminals.

"We hope for a bigger police presence in the form of Ops Payung here," said the 69-year-old.

The residents have brought their concerns to the attention of Kampung Tunku assemblyman Lau Weng San, who has said he will meet with the Sungai Way police station officer-in-charge to discuss the matter.

Lau said he would also organise a crime prevention dialogue with the residents and look into the possibility of a voluntary patrol unit as well as a gated and guarded community.

"Kampung Tunku was not included in the 150 crime hotspots, but it looks like crime there has gone from bad to worse.

"I will also write to the Federal government to request for more men to look after the safety of residents there.

"The Sungai Way police station has some 200 officers and they have to cover areas like SS1, SS3, SS5, Desa Mentari and Sunway, so they are spread very thin," he said.

Lau said he would work to light up the back lanes of the neighbourhood and get the Petaling Jaya City Council enforcement department to monitor illegal activities, such as alcohol consumption, on the playground.