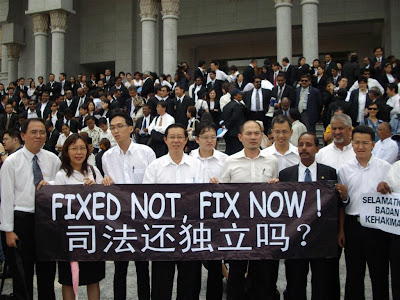 We march today to tell Malaysians and the world how low our once vaunted judiciary has fallen in the estimation of lawyers, fellow judges and citizens of the country.

The eight-minute Lingam tape has defrocked and made naked the conspiracy at the highest levels of the judiciary to fix high profile cases and promote like-minded, weak-kneed judges who will be subservient to their masters.

After such a revelation the only way forward is to cut away the cancer and chart a new path. Any other action i.e. closing an eye or sweeping it under the carpet will only prolong the agony and be a great disservice to the next generation.

Malaysians and millions of people in the world have watched the eight minute video clip now freely available on the internet, a clip that has seriously compromised the independence and integrity of the Malaysian judiciary at the highest level.

We cannot sweep this major scandal under the carpet and still claim we have a viable judiciary.

This cancer in our judiciary must be investigated and cleaned up. This is the only way the people can once again begin to have confidence and trust in our judges and the justice system.

It is clear from the eight minute video tape that our judiciary has been compromised for many years and completely made subservient to powerful individuals.

We march to tell the government that an immediate inquiry into the scandal is the only way forward for Malaysia to right the wrongs done and rehabilitate the most important institution in a free and democratic society.

Without a through and open investigation we cannot close one sordid chapter and open a new one.

The rot set in 1998 when we protested but failed to stop the arbitrary and unconstitutional sacking of than Lord President Tun Salleh Abas and Datuk George Seah and the late Tan Sri Wan Sulaiman as Supreme Court judges.

We never recovered from the series of body blows to the independence, impartiality, integrity and professionalism of the judiciary that was inflicted by then Prime Minister Dr Mahathir Mohamad and assisted by a cable of cronies.

The vacuum was filled by less then honourable people. Today we are paying the price of our failure.

Now almost two decades later we are faced with a cancer that has grown and spread its tentacles.

Malaysians had hoped that Prime Minister Abdullah Ahmad Badawi will deliver his promise to restore national and international confidence in the Malaysian system of justice with a truly independent judiciary and a just rule of law – but Abdullah failed to deliver.

After the video expose Ahmad Fairuz is not fit to continue as Chief Justice, as he clearly had never heard and does not understand the meaning of judicial accountability.

National and international confidence in the independence, impartiality, integrity and professionalism of the judiciary is at stake. If addressed, the scandal will have a major adverse impact on Malaysia’s efforts to enhance international competitiveness to face the challenges of globalization.

We march today to ensure that the government address not only the scandal of Lingam Tape but the crisis of confidence in the system of justice by setting up a Royal Commission of Inquiry to repair the damage and heal the deep wounds.