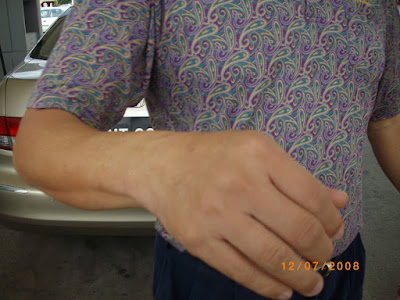 Today is a frustrated day for me.

I was on my bike entering Sea Park Shell petrol station to fill up my bike as it is running low on fuel.

I was riding pass through two cars on my left and right, only to discover that the pumps were occupied. I have to ride through them and go to the other side for my petrol.

When I was riding though, the drive of the car on my left, a light yellow Honda Accord, opened! I managed to avoid it but unfortunately I lost balance and almost fallen to the ground on my right. Lucikily the Toyota Prado on my right is right at the place to support me.

I turned back, trying to talk to the middle-aged driver of the Honda Accord. I told him it was not right for him to open his car door without looking back to check whether there are any vehicle approaching.

He seemed to be stunned with my action. Yes, I always do that whenever I met up with some reckless drivers who do not give a damn to motorcyclists even though they are at fault.

He refused to wind down his window although I told him to do that so that I can talk to him. His car door is half-opened (in fact, it is always in closed position). I told him he is at fault. He told me I should not ride pass between cars. I told him I was looking for my pump, the law did not prohibit me to ride pass between cars. I rebut him that he should be the person to ensure that there is no approaching vehicles from behind, whether it is a car or a motorbike.

He refused to layan me and even told to go away. I was very angry but I controlled my emotion. I told him that he is at fault and asked him to admit it with an apology.

He refused to talk to me. I have no way but to take his car photograph. He was lucky that he managed to block my camera (I can't remember the car plate but it is something like WMT 9???. For those who use to patron Sea Park Shell Station, please watchful of any light yellow Honda Accord carrying plate number WMT 9???). I warned him not to touch me. I told him I am not saying anything but merely doing what I should do.

This incident tells us that there are still a lot of reckless drivers in town. They could have the money to buy luxurious cars worth six figures but they are having a mentality of less than four figures, probably their driving licenses are also bought through illegal means. Such arrogant driver is a classical example.

If this can happen on a YB, how about those normal motorcyclists?

Wengsan, I am sorry to hear of this unfortunate incident. It is true that all of us are responsible for our actions, and this man was acting irresponsibly.

I used to drive carelessly and made people upset, just to make myself feel good. But this is not the right way to live with other people.

It is impossible to change the world by just taking care of ourselves, and impossible also to change by teach others a lesson.

Thanks for sharing your story.