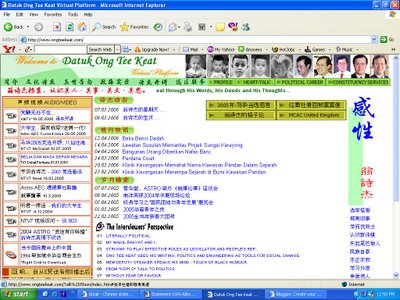 MCA Vice President and MP for Pandan Datuk Ong Tee Keat yesterday announced that he will declare through his website on how the RM 2 million MP Constituency Allocations allocated for Pandan be spent.
He also said that he has put up a link about Constituency Affairs in his website earlier this year and public can log on to his website to check on how the allocation is spent, in which he said that the allocation is mainly used for maintaining basic infrastructure and amenities in his area.

DAP Selangor welcomes such move from Ong Tee Keat, as MP Constituency Allocations are sourced from public coffer and there is no reason why the purpose of the allocation be kept from public knowledge, in order to avoid leakages.

It is a deploring situation that such leakages are very rampant not only in schools but also in a lot of organizations.

The United Chinese School Managers of Pahang said that the leakage does not only take place in schools but also in various organizations, welfare societies and community societies.

He said that they have no problems with cash donations but not allocations on various facilities and infrastructure as recipients have to employ authorized contractors to carry out the works which a lot of time do not really worth the money paid.

DAP MP for Bagan Lim Hock Seng also said in a public ceramah in Penang three days ago that there are a lot of temples complained to him that some elected representatives promised to sponsor furniture worth RM3000 but the recipient must buy them from authorized dealers or companies.

There was also one incident when the temple committees was informed that 25% of the cash allocation will be deducted from the total allocation when they requested for cash allocations instead of material donations from this particular elected representative.

In the same occasion, DAP MP for Chong Eng also quoted one example that there was a BN MP who pledged RM 20,000 allocation to a church for its renovation but the church could only get RM 16,000 finally.

She said that although there were dissatisfactions but they have to bear with it as they all need the money to carry out works. It has been a norm when theh could only get RM 8,500 when the full allocation is RM 10,000. Indirectly, this kind of system is no different from encouraging more corruption.

DAP Selangor believes that such unhealthy way to distributing public money for constituency allocation must be conducted in a fair, open and transparent system while an institutionalized system must be in place for the government to pass on allocations to various welfare bodies to avoid leakages and misuse of public money, as one of the crucial long term solution that the government should kick off now.

On a short term basis, all BN Selangor MPs should start declaring how their MPs Constituency Allocations are spent and used so far. Since Ong Tee Keat is one of the seven MCA Selangor MPs who do so and he is holding high post in the government and party, we therefore urge the other six MCA Selangor MPs (Selayang – Chan Kong Choy, PJ Utara – Chew Mei Fun, PJ Selatan – Donald Lim Siang Chai, Serdang – Yap Pian Hong, Kelana Jaya – Loo Seng Kok and Klang – Tan Yee Kew) to follow suit.