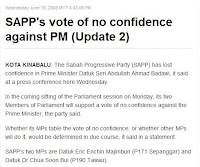 SAPP from Sabah has finally made their stand. I congratulate them for the courage to do that. While politicians in the state have long been labelled as opportunists due to the playgueing party-hopping culture, SAPP's stand by remaining in the BN while proposing a no-confidence motion in the Parliament is another blow to BN and the leadership of Pak Lah.

SAPP has only two MPs in the Parliament and four ADUNs in the Sabah Legislative Assembly Hall. There is no way that the pull out of SAPP from BN will effect any changes in govenrment, both in the federal level and the state level.

A lot of us have missed the focus of this most recent political development in Sabah when they focused more on the no-confidence motion and the posibility of toppling BN government, rather than the long-standing issues faced by Sabahans which I don't think I need to elaborate here.

What is DAP stand on this issue? We only get report that PKR fully supports the idea.

There were less lead from Lim Kit Siang in the Malaysian Insider report. He merely touch on the technical issue of whether the motion can be adopted in the parliament.

Lets hear from DAP. This will be a challenging time for Pakatan partners to cut across the political divide now that a BN component party is initiating a move.

I think the DAP is quite cautious with the recent political development in Sabah, especially when Sabah politicians are notorious party hoppers.