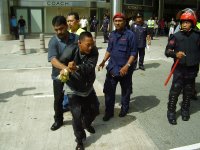 A man was hand-cuffed and brought to the police car. 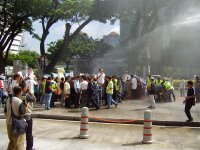 The FRU started shooting water cannon to the crowds. 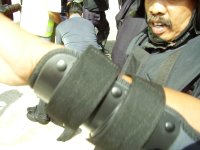 I was barred from taking photos by this FRU member. I almost fall down because of his pushing! 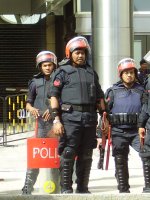 "Look! You guys better get off my sight! Or I will bite you!" 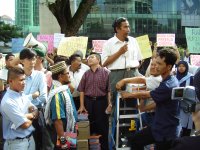 Dr Hatta was addressing the crowd. He was the first speaker. 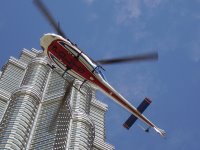 I have seen the copter a few times, but never it is so close to my eyesight until I can see the word "POLIS" beneath it. It was trying to fly low to interupt the demonstration with strong wind.

A group of protestors came out with a banner. 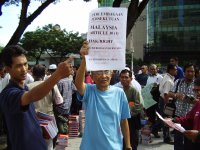 "Come on lah! Respect my right! Look at the Constitution! Read what it says!"

For those who has been following my blog for the past one week, I am sorry for not being to update it as I am now in Kuching helping out our thr

ee candidates in Kuching to fight their way to the Sarawak State Legislative Assembly Hall.

It is a tough and close fight in Kuching as SUPP is facing the toughest fight in almost every town and city in Sarawak.

Sarawak urban Chinese seems to demand for a wind of change, of course, Chong Chieng Jen (35, lawyer, MP for Bandar Kuching) is a well known face in Kuching and he will fight SUPP’s Alfred Yap in Kota Sentosa. Yap is also a well-known figure in Kuching and it is alleged that he was ordered by CM to come to Kota Sentosa in order to prevent Chong to be elected as ADUN.

According to Chong, it is important for him to be elected to the State Legislative Assembly Hall so that he can continue to expose all the wrong-doings and malpractices in the State Government.

The warfare in Kuching is quite organized and the morale of the members here are very high. All are expecting either two or three seats from Kuching.

这么见树不见林的短视之见，如何负起为民争取公平的政策责任？我们希望卢永平能够向在2004年支持他的华裔选民清楚交代：到底他是否只满足于一间华小，而且还是一间从霹雳州搬迁过来的华小，而不是一劳永逸地解决城市华小长期爆满的问题？
Posted by LAU WENG SAN at 5/03/2006 06:02:00 pm No comments: 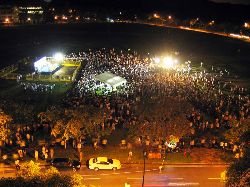 Frankly speaking, I have never imagined that this will happen or this can happen in Singapore - a public rally organised by opposition party, Worker's Party, which drew more than 10,000 voters in a pseudo-democratic society like Singapore.

Malaysians can no longer tolerate reason that Public Rally is a threat to public safety, unless we admit that we are less capable than Singapore to preserve public safety and order, which I believe is not the case here in Malaysia.

If Singapore's Opposition can be granted permit to organise such public rally, there's no reason why Oppositions in Malaysia not allowed so. 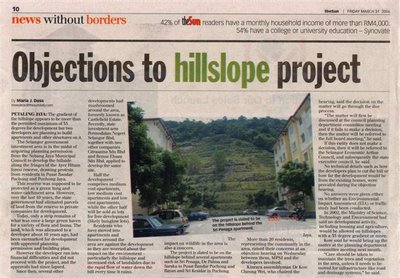 It is already more than a month and yet the local council (Subang Jaya Municipal Council) and the local state assemblyman who is also a MPSJ councilor failed to reply with any outcome on a hillslope project which is to be developed along the fringes of the Ayer Hitam forest reserve.
Residents residing around the area from Sri Penaga Apartment, D’Palma Apartment, Saraka Apartment, Sri Cempaka Apartment, Desa Tanjung Apartment and D’Kiara Apartment have already submitted their disagreement to the Department of Planning and Development, Subang Jaya Municipal Council on 28th March 2006 in an objection hearing between them, MPSJ and the developer involved. The hearing was chaired by Kinrara Assemblyman Kow Cheong Wei.

According to the Objection Letter by residents from the six apartments mentioned above, they had protested the development project based on the following reason:

1. that Ayer Hitam Forest Reserve is the last piece of green lung available in Puchong and it shall be well-protected by the authority without being turned into any housing projects. Residents have been told by their developer, SP Setia Berhad Group, that this piece of land is another forest reserve which shall not be developed.
2. that the retention pond is also located too close to the hillslope and the pond must be combined with a bigger one for easier supervision in future.
3. that landslide, land erosion, air and water pollution, flash floods as well as other natural disasters can easily take place once the hillslope is developed. After all, over development is another major cause of flash floods and storms took place in Klang Valley recently.
4. that the development will definitely worsen the already congested traffic in Persiaran Wawasan, Persiaran Indera, Persiaran Bukit, Jalan Wawasan 4/12 and the junction going out to LDP.
5. that the Primary School Reserve for Pusat Bandar Puchong is located to close to the main entrance of the project.
6. that the gradient of the hillslope is more that 35 degree which is beyond the maximum allowable gradient for any development projects.

‘“The matter will first be discussed at the council planning department committee meeting and if it fails to make a decision, then the matter wil be referred to a full board meeting,” he said.

‘“If this entity does not make a decision, then it will be referred to the Selangor Economic Action Council, and subsequently the state executive council,’ he said’

It is a surprise that technical details on the construction and the content of the EIA and traffic report for the project were provided during the objection hearing.

For such a project It is most disappointing that to date, the local council and the state assemblyman had yet to announce any decision or any outcome from various meeting as well as of whether the meeting had been held or not. Local council shall not practice secrecy in their running and any progress on this matter shall be made known to the public.
Posted by LAU WENG SAN at 5/02/2006 03:05:00 pm 2 comments:

我们认为梳邦再也市议会在这事件不应该隐秘行事，反之市议会应该让有关居民知道市议会的决定和事情的最新发展。
Posted by LAU WENG SAN at 5/02/2006 02:57:00 pm No comments: