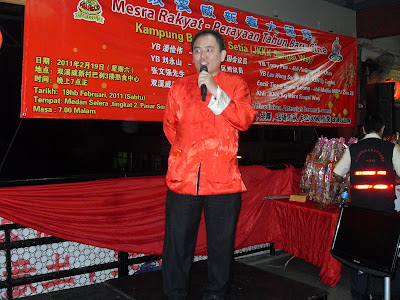 虽然我认为这场辩论要让巫统参与，由民联直接对垒国阵才有意义，但如果黄冠文还是要针对这课题发文告，那么我建议他直接回应，或者是他代表林祥才回应是否接受辩论挑战，而不是以其他不相关的琐碎事情来逃避？
Posted by LAU WENG SAN at 2/17/2011 03:11:00 pm No comments:

除非联邦政府停止干预国立大专的行政，要不然在缺乏独立思考的校风之下，马大的学术水平肯定停滞不前，更不用谈恢复马大校园民主的昔日风采。
Posted by LAU WENG SAN at 2/15/2011 03:11:00 pm No comments:

State owned Selangor State Investment Center Berhad (SSIC Berhad) will be tasked with developing this database and will be a clearinghouse for obtaining Indonesian labour, as practised by Indonesia in other countries.

Menteri Besar, YAB Tan Sri Abdul Khalid Ibrahim, said that when this database is fully completed, local and international companies in Selangor with a genuine need for legal foreign labour can use the services provided by SSIC Berhad.

"SSIC Berhad will serve as a facilitator, and with this database, efforts to hire Indonesia workers will be easier and more streamlined,” he said.

He was speaking at the signing of a memorandum of understanding (MoU) between the SSIC and Gabungan PPTKIS in Hotel Sultan, Jakarta today. Gabungan PPTKIS Indonesia are five private companies involved in the migration of labor to Malaysia.

Tan Sri Abdul Khalid said the move would not only ensure the efficient supply of labor, but also monitor whether workers hired are legal and thus address human trafficking activities.

"Selangor is the first state government in Malaysia that has set up an Anti-Trafficking Council to prevent trafficking and this cooperation is yet another addition to our efforts,” he said.

Selangor Chief Minister also announced the PJ Elevated City project by PKNS at Sungei Way Free Trade Zone in Petaling Jaya that includes the construction of a hostel that can accommodate 10,00 migrant workers.

This project is developed on a land area of 20 acres with a gross development value of RM1.2 billion. Other facilities to be offered include a business center of commercial and corporate offices, and a motor hub.

The Menteri Besar said that the proposal to create this database came after SSIC conducted a study which concluded that the need for foreign labour in the industrial sector over the next three years was still high.

The Menteri Besar said that the electronics industrial sector required both skilled and unskilled labour based on estimates of increases in production capacity in the years to come.

Selangor contributes 35% of Malaysia’s GDP and its industrial sector is the biggest in the country. 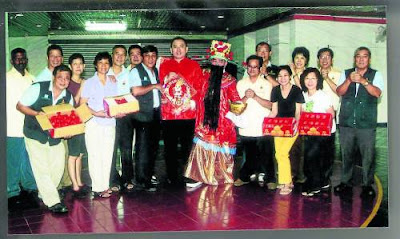 （雪蘭莪‧八打靈再也7日訊）雙溪威新村治安暨發展委員會代表和甘榜東姑州議員劉永山等人，於日前上午到雙溪威新村巴剎，向市民和商販拜年。到場者包括靈市議員張文強、陳有才村長、高潤財秘書、林秉鍬、黃明、黃進財、鍾秀珍、村委成員。財神爺在新年歌曲播送下派紅包和蕉柑，場面熱闹。
星洲日報／大都會‧2011.02.07
Posted by LAU WENG SAN at 2/13/2011 09:22:00 am No comments:

Malaysia's national tourism agency promotes the country as "a bubbling, bustling melting pot of races and religions where Malays, Indians, Chinese and many other ethnic groups live together in peace and harmony." Malaysian Prime Minister Najib Tun Razak echoed this view when he announced his government's theme, One Malaysia. "What makes Malaysia unique," Mr. Najib said, "is the diversity of our peoples. One Malaysia's goal is to preserve and enhance this unity in diversity, which has always been our strength and remains our best hope for the future."

If Mr. Najib is serious about achieving that goal, a long look in the mirror might be in order first. Despite the government's new catchphrase, racial and religious tensions are higher today than when Mr. Najib took office in 2009. Indeed, they are worse than at any time since 1969, when at least 200 people died in racial clashes between the majority Malay and minority Chinese communities. The recent deterioration is due to the troubling fact that the country's leadership is tolerating, and in some cases provoking, ethnic factionalism through words and actions.

For instance, when the Catholic archbishop of Kuala Lumpur invited the prime minister for a Christmas Day open house last December, Hardev Kaur, an aide to Mr. Najib, said Christian crosses would have to be removed. There could be no carols or prayers, so as not to offend the prime minister, who is Muslim. Ms. Kaur later insisted that she "had made it clear that it was a request and not an instruction," as if any Malaysian could say no to a request from the prime minister's office.

Similar examples of insensitivity abound. In September 2009, Minister of Home Affairs Hishammuddin Onn met with protesters who had carried the decapitated head of a cow, a sacred animal in the Hindu religion, to an Indian temple. Mr. Hishammuddin then held a press conference defending their actions. Two months later, Defense Minister Ahmad Zahid Hamidi told Parliament that one reason Malaysia's armed forces are overwhelmingly Malay is that other ethnic groups have a "low spirit of patriotism." Under public pressure, he later apologized.

The leading Malay language newspaper, Utusan Melayu, prints what opposition leader Lim Kit Siang calls a daily staple of falsehoods that stoke racial hatred. Utusan, which is owned by Mr. Najib's political party, has claimed that the opposition would make Malaysia a colony of China and abolish the Malay monarchy. It regularly attacks Chinese Malaysian politicians, and even suggested that one of them, parliamentarian Teresa Kok, should be killed.

This steady erosion of tolerance is more than a political challenge. It's an economic problem as well.

Once one of the developing world's stars, Malaysia's economy has underperformed for the past decade. To meet its much-vaunted goal of becoming a developed nation by 2020, Malaysia needs to grow by 8% per year during this decade. That level of growth will require major private investment from both domestic and foreign sources, upgraded human skills, and significant economic reform. Worsening racial and religious tensions stand in the way.

Almost 500,000 Malaysians left the country between 2007 and 2009, more than doubling the number of Malaysian professionals who live overseas. It appears that most were skilled ethnic Chinese and Indian Malaysians, tired of being treated as second-class citizens in their own country and denied the opportunity to compete on a level playing field, whether in education, business, or government. Many of these emigrants, as well as the many Malaysian students who study overseas and never return (again, most of whom are ethnic Chinese and Indian), have the business, engineering, and scientific skills that Malaysia needs for its future. They also have the cultural and linguistic savvy to enhance Malaysia's economic ties with Asia's two biggest growing markets, China and India.

Of course, one could argue that discrimination isn't new for these Chinese and Indians. Malaysia's affirmative action policies for its Malay majority—which give them preference in everything from stock allocation to housing discounts—have been in place for decades. So what is driving the ethnic minorities away now?

First, these minorities increasingly feel that they have lost a voice in their own government. The Chinese and Indian political parties in the ruling coalition are supposed to protect the interests of their communities, but over the past few years, they have been neutered. They stand largely silent in the face of the growing racial insults hurled by their Malay political partners. Today over 90% of the civil service, police, military, university lecturers, and overseas diplomatic staff are Malay. Even TalentCorp, the government agency created in 2010 that is supposed to encourage overseas Malaysians to return home, is headed by a Malay, with an all-Malay Board of Trustees.

Second, economic reform and adjustments to the government's affirmative action policies are on hold. Although Mr. Najib held out the hope of change a year ago with his New Economic Model, which promised an "inclusive" affirmative action policy that would be, in Mr. Najib's words, "market friendly, merit-based, transparent and needs-based," he has failed to follow through. This is because of opposition from right-wing militant Malay groups such as Perkasa, which believe that a move towards meritocracy and transparency threatens what they call "Malay rights."

But stalling reform will mean a further loss in competitiveness and slower growth. It also means that the cronyism and no-bid contracts that favor the well-connected will continue. All this sends a discouraging signal to many young Malaysians that no matter how hard they study or work, they will have a hard time getting ahead.

Mr. Najib may not actually believe much of the rhetoric emanating from his party and his government's officers, but he tolerates it because he needs to shore up his Malay base. It's politically convenient at a time when his party faces its most serious opposition challenge in recent memory—and especially when the opposition is challenging the government on ethnic policy and its economic consequences. One young opposition leader, parliamentarian Nurul Izzah Anwar, the daughter of former deputy prime minister Anwar Ibrahim, has proposed a national debate on what she called the alternative visions of Malaysia's future—whether it should be a Malay nation or a Malaysian nation. For that, she earned the wrath of Perkasa; the government suggested her remark was "seditious."

Malaysia's government might find it politically expedient to stir the racial and religious pot, but its opportunism comes with an economic price tag. Its citizens will continue to vote with their feet and take their money and talents with them. And foreign investors, concerned about racial instability and the absence of meaningful economic reform, will continue to look elsewhere to do business.

反之，纳吉不能向巫统和联邦政府内的种族狂热分子妥协，而必须不分政治立场和族群，以行动落实“一个大马”政纲，让赵明福的冤案能够早日水落石出。
Posted by LAU WENG SAN at 2/01/2011 08:47:00 pm No comments:

Happy Chinese New Year and a big thank you.

We are coming to the end of the Chinese Lunar Calendar Year and we will be celebrating the year of Rabbit in a few days. First of all, I wish to thank all my supporters, followers, volunteers (especially those from TunkuCAT) and staffs of DAP Selangor and my office for their tireless effort in assisting me to carry out my duties as an elected representative as well as party port-folio holder.

I also wish to thank JKKK Seri Setia and the twon councillors under my constituency, Ir Darren Tiong and Jeyaselan. They had been very cooperative and helpful with my constituency works.

There were many riddles and challenges for the past one year but together we managed to go through the thick and thin of it.