At a joint Press conference yesterday, Fomca chief executive officer Datuk Paul Selvaraj said: "Those three acts affecting public transport should be revamped because the number of road accidents are increasing and there is a need to put in place more effective measures in order for the public to have more trust in road safety, especially when it comes to express buses.

He said Fomca and NCCC hope their joint memorandum will receive serious consideration by the Transport Ministry, including their calls for revamp of the three acts.

"Road accidents can be reduced if there are more stringent measures. For instance, the vehicle safety checks by Puspakom takes four minutes on the average and this is not good enough. We are also dissatisfied with the performances of the Malaysian Institute of Road Safety Research (MIROS) and the Land Public Transport Commission (SPAD)."

Also present at the Press conference at the Fomca headquarters in Sungai Way here was NCCC senior manager M. Matheevani who said: "In the memorandum, Fomca also suggested NCCC become a secretariat supported by SPAD so that we can work alongside with SPAD to improve public transport.

"We also recommend more buses for the benefit and convenience of passengers, and also the need for buses to depart and arrive on time."
Posted by LAU WENG SAN at 8/25/2011 05:38:00 pm No comments:

Petaling Jaya Commercial Crimes Investigations Department chief DSP Mazelan Paijan said this was based on checks on telephone numbers on the stickers, flyers and banners illegally placed on lamp posts, telephone booths, building walls and other places by runners of illegal money-lenders.

He said police found 77 mobile phone and fixed-line telephone numbers of various telcos on the advertisements they had collected from various locations in Petaling Jaya and learnt that it pointed to two illegal moneylenders based in Klang and Pandan Indah.

He said police had called the phone numbers and summoned the suspected runners of Ah Longs but they often denied knowledge of being involved in loanshark activities.

Mazelan was at the Sungai Way police station here today where he headed a joint-operation with the Petaling Jaya City Council (MBPJ) to tear down and remove stickers and banners placed by loansharks in the district.

"Although Ah Long activities have slowed down and are not rampant in PJ, we are being proactive in carrying out such prevention measures especially at this time when loan sharks are introducing special loan packages they promote as 'Raya loans'.

"Festive seasons are often a target of Ah Longs as they know people need money for the celebrations," he said before kicking off the operations at Dataran Mentari at Bandar Sunway where dozens of public utilities and properties have been scarred by the loanshark advertisements stickers.

He urged the public who spot those sticking such advertisements to call the police or MBPJ.

MBPJ also has an ongoing campaign where those who tip-off the council on such acts will be rewarded with RM100.

However, the measly reward will only be paid out if the culprit is caught and there is sufficient evidence to charge him in court.
Posted by LAU WENG SAN at 8/25/2011 05:37:00 pm No comments:

事实上，我国是原油出口国，根本不需要像新加坡、泰国等国家一样打贵油。我国每年因原油所获得的利润数以亿计。所以政府根本没有任何的理由拒绝人民降低油价的要求。因此，中央政府不要整天只会喊口号要让人民过好的生活，而应该以实际的行动来为民解困。
Posted by LAU WENG SAN at 8/19/2011 02:10:00 pm No comments:

前朝州政府在分派廉价组屋方面也办得非常不透明。由于经常出现掉包的现象，导致不符合资格的人士也获得这些单位，更有人转售手上的单位来牟取暴利。面对这一箩箩的问题，林祥才当灵南国会议员是否曾经为这些低下阶层人民发言？
Posted by LAU WENG SAN at 8/17/2011 11:01:00 am No comments: 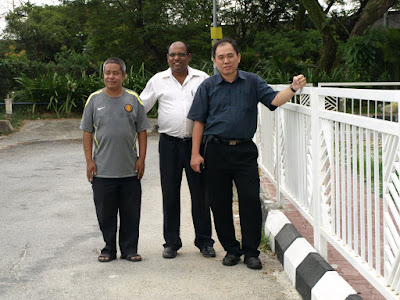 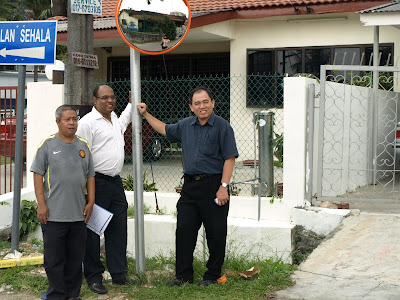 Present to check on the newly installed equipment was Kampung Tunku assemblyman Lau Weng San.
Posted by LAU WENG SAN at 8/02/2011 07:29:00 am No comments: