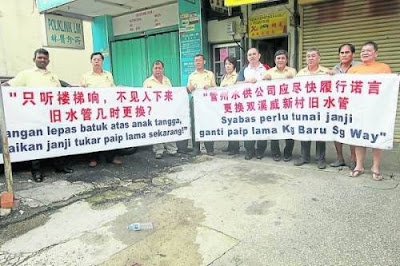 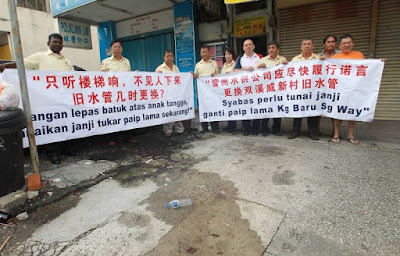 Leaky Sungai Way pipes to be replaced next year

PETALING JAYA: Residents in Sungai Way are fed-up of having to face problems of low water pressure.

They have sent a message to Syarikat Bekalan Air Selangor Sdn Bhd (Syabas) that they will no longer tolerate any excuses for not replacing old pipes.

For the past four years, the pipes have been bursting under high pressure, and the residents claim Syabas has failed to respond to their pleas for help.

On Sunday, about 20 residents and traders staged a protest against Syabas in front of the Sungai Way market demanding that Syabas replaces the old pipes soon.

“The Community Security and Development Committee has been urging Syabas to replace the old pipes for many years because the residents have been facing low water pressure,” Lau said.

“With the pipes still leaking to this day, the situation has become critical. We believe replacing them immediately is the long-term solution.”

He added Syabas had taken action according to the standard operating procedure.

“However, as a long-term solution, Syabas has proposed the pipe replacement project, which covers 8km in Sungai Way New Village, be implemented immediately,” he said.

“The proposal has been approved by the National Water Services Commission (SPAN) and is scheduled for implementation early next year.”
Posted by LAU WENG SAN at 1/20/2012 08:45:00 am No comments: 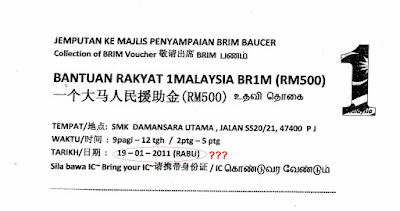 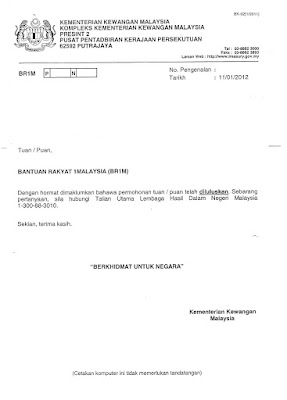 A complainant from Damansara Utama state seat came to my office three days ago, showing me a letter of confirmation from Finance Ministry informing him to claim his RM500 1Malaysia People's Aid (Bantuan Rakyat 1Malaysia or BR1M)
The complainant told me that the date printed on the slip was misleading as 19th January 2012 is actually a Thursday but it was printed as "Rabu" or Wednesday when it should be 18th January 2012 if the day to claim the monetary aid falls on Wednesday.
Also it seems like our officers in the Finance Ministry are still living in yester-year as it was "2011" printed on the slip and not "2012". A check with 2011 calendar shows that 19th January 2011 was actually a Wednesday.
Alas, the officers are still using the old calendar!
The complainant told me that it is very confusing for him. I did try to help him on the spot by calling the two telephone numbers printed on the letter, ie 1300-88-3010 and 03-88823000 but could not get through. Thus the complainant will have to check it out on Wednesday and do the job twice if the exact date of the disbursement was not on Wednesday but Thursday.
It was reported yesterday that a group of residents were not allowed to claim their money, causing unhappiness in SMK (P) Sri Aman. Before that, the date of the first disbursement was actually postponed once.
Certainly, rushed jobs do not always mean good jobs.
Posted by LAU WENG SAN at 1/17/2012 05:57:00 pm No comments: 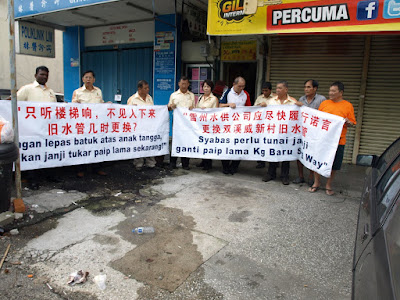 I regret that Syabas has been launching some media campaign in the name of "water crisis" to arm-twist Selangor state government to agree to Langat 2 water treatment plant.

I urge Syabas to discard such heinous political games and concentrate on improving its efficiency and services to the people during this interim period.

Therefore, it is the responsibility of Syabas to immediately replace old pipes in Selangor, particularly Sungai Way new village where villagers have to bear with low water pressure and leaking underground pipes almost everyday.

Villagers start facing low water pressure several years ago. When PR first took over the state government, I have requested Syabas to examine the problem and find a quick solution to it.

The root cause of the problem is the old and expired underground water pipes in Sungai Way new village leak when the pipes, especially the one in Jalan SS9A/14 and Jalan SS9A/13 fails to sustain higher water pressure, causing leakages and higher Non-Revenue Water (NRW)

Although Syabas does come and resolve the problem immediately after receiving complaints, this is insufficient to resolve the problem. Syabas has agreed to replace the old pipes in Sungai Way in a letter addressed to the Sungai Way new village JKKK in April 2011. However, the JKKK was informed in December 2011 that the project has to be postponed pending financial approval from the Federal and State government. I do not know what kind of approval Syabas needs from Selangor State Government the state government usually is not involved in Syabas' old pipes replacement scheme.

I hope Syabas can immediately resolve whatever internal problems that they are facing and embark on the old pipes replacement scheme in Sungai Way new village. More importantly, Syabas has already promised to implement the scheme last year.

This is the real business that Syabas has to concentrate instead of playing politics by using "water crisis" as reason to mislead and arm-twist the state government of Selangor to give-in to their demands.
Posted by LAU WENG SAN at 1/16/2012 11:53:00 am No comments: 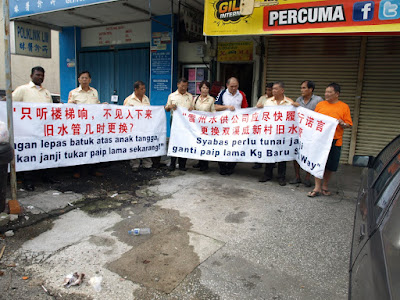 双溪威新村尤其是14路底下的水管因长久失修，经常破裂，造成流失珍贵的水源，也直接造成无效益用水量的增加，因此雪州水供公司此时此刻应该踏踏实实地履行他们的诺言，尽早更换村内的破旧水管，多做事少说话。
Posted by LAU WENG SAN at 1/16/2012 10:59:00 am No comments:

因此，本人十分支持阿当阿里通过法院挑战校方的决定，毋论结果如何，就让法院成为其挑战专权者的平台，让这位独立思考、不受影响的大专生再为我国其他年轻学子立下典范！
Posted by LAU WENG SAN at 1/09/2012 11:57:00 pm No comments: