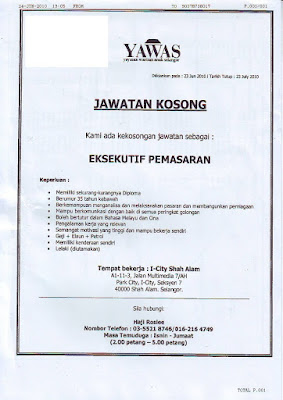 Email ThisBlogThis!Share to TwitterShare to FacebookShare to Pinterest
Labels: International

Here is another sad story of top-scorer and well-performing student not getting a place in the Public Service Department (PSD) scholarship.
How are we going to stop the brain drain if such incident continue to happen every year? The Singapore Medical Council with effective from 2010 will recognise the Bachelor of Medicine and Surgery (MBBS) offered by University of Malaya (UM) and National University of Malaysia (UKM).
I was told that 80% of MBBS fresh graduates from UM and UKM are likely to be employed by their Singaporean employers. This means there will be further brain drain for our beloved nation.
What is the Prime Minister going to do? I wonder if he has the answers.

Outstanding student but gov't couldn't care less
Parents of A | Jun 9, 10 5:04pm
Malaysiakini.com
Let me give you an example of the education system of this country. My son - and I name him as just 'A' - finished his schooling and sat for his SPM exams in 2009 Here is a short note on him. In his Standard 6 exams, he scored all As except for Bahasa Malaysia which he scored a B.
In his Form 3, he scored all As except for BM which he scored a B. In his Form 5 (SPM) he scored 9A's and a B+ for his Moral Studies. He studied at the Kelana Jaya secondary school and his primary at the Kampung Tunku primary school.
I wish to say here that the Kelana Jaya secondary school is an excellent school from what I know. The Principal and her team of teachers are incredibly dedicated. I truly wish every school had this same breed of teachers.
Our son 'A' was the winner of the Vijaya Shankar Paramsothy Trophy which was named after the son of an ex-school mate who perished in the Sept 11 World Trade Centre tragedy in the US. This trophy is awarded to the top most students of the year. 'A' also had an excellent track record in school having been an active student in extracurricular activities be it debating, sports etc.
He was also the assistant head prefect of this school. He has an excellent persona in the sense he is well-liked by every schoolmate and teachers. He equally shows deep love for his schoolmates and teachers.
Having said the above, what distressed us most was that he was rejected by the PSD for his dentistry course of study. Is this how a child is appreciated at the end of the day after having been an outstanding student in school?
What steps are taken to show a deep appreciation for good students in this country? Or is the said ministry merely dependent on their computer to pick out some names based on some criteria? What happens to the student who in real life exhibited the perfect criteria for a future talent useful to this country?
Let me add here we applied to TAR college for his A-level admission and most surprisingly, he was admitted with a full scholarship. If TAR college could identify a promising student irrespective of caste, creed or community then what ails our own government from doing the same? Over now to the minister of education.

Zaid Ibrahim: We Need Party Members Who Are Committed

Unless the Federal Government is ready to explain to the people of all its financial scandals in the past, and fight all the way to reduce corruption and leakages in the federal budgets, else it has no moral authority to reduce subsidies.
I found that media had in the past two weeks focused on the intention of the Federal Government to reduce subsidies, coupled with statement that the debt of the Federal Government has increased to over RM300 billion, the Federal Government will go bankrupt in nine years and the oil price in Malaysia is even lower than Somali. Economic experts also commented that high subsidies are causing distortion to market economy, causing negative impact to our economy.
I feel that all these are meaningless talks if we choose to ignore the leakages in the Federal Government’s spending since decades ago.
I believe majority of the citizens will definitely agree to reduce subsidies for the sake of the nation. But at the same time, citizens are also demanding that the Federal Government should adopt the same principle when dealing with subsidies and people’s wishes. If Malaysia being a nation blessed with so many natural resources, what is the need of reducing subsidies? When have all these resources gone to?
Prime Minister Najib had made an infamous “I help you, you help me” statement in Sibu. He said in Sibu that he wanted to have a “deal” with the people of Sibu. Now, all Malaysians should request a “deal” with the PM too.
We can help the Federal Government if the Federal Government can help us, that is a reduction in subsidies is possible but the Federal Government must explain all the previous financial scandals amounted to not only millions, tens of millions, hundreds of millions, but also billions and tens of billions of ringgit, ranging from the 1980s Maminco scandal, Bank Bumiputera scandal, Bank Negara’s forex scandal in the early 90s, Maika Holding scandals, financial crisis in 1997, bailout of various GLCs like MAS, Proton etc as well as the most recent RM12.5 billion PKFZ scandal. We can see the Federal Government’s hands in these scandals. How much had we spent to bail them out?
Moreover, is the Federal Government prepared to reveal in full the account of Petronas to the people? Major GLCs’ revenues are improving year by year. Pre-tax profits of PLUS, TNB and Petronas are RM1.62 billion, RM1.54 billion and RM1.23 billion in FY2009 and yet the government is claiming that it is going to bankrupt in nine years and that the people will have to pay more for their toll, electricity tariff and petrol. What are the reasons? Where are leakages?
Is the Federal Government willing to implement full and complete open tender system? Is the Federal Government prepared to answer why the Ministry of Defense (Mindef) spent RM8 billion to purchase 257 armoured personnel carriers, which cost RM27 million more than market price?
Is there any reason to explain why the escalation of construction cost of Shah Alam Hospital to RM48 million? Even for the purchase of shoes, furniture, instant coffee powder, chili sauce etc, the Ministry of Finance (MoF) under Najib is directing all Federal Government agencies to only procure from selected suppliers. What is the reason for doing so? And why is the registered address of one of the suppliers is located at Wisma UMNO Pahang? Can there be any guarantee from the Federal Government that roof-collapsing incident like in the Kuala Terengganu Sultan Mizan Zainal Abidin Stadium will forever be a history of the past?
The Federal Government must explain to the people before it can take away subsidies from the people and I am here to ask: Dear Mr Prime Minister, the people can help you, but are you going to help the people? Can we strike a deal?
Posted by LAU WENG SAN at 6/01/2010 11:23:00 am 1 comment: