By Azam Aris of theedgemalaysia.com | The Edge Malaysia – Thu, Aug 9, 2012 DO Malaysians deserve cheaper cars? After having to pay so much more than consumers in other countries for so many years to buy a car, the majority would say, "Yes! We want cheaper cars!"

I remember in the early 1980s when my brother bought his first car — a Mazda 323, which only cost about RM17,000. The other options were the slightly-cheaper Nissan Sunny and the slightly pricier Ford Laser.

A fresh graduate's salary then was RM1,200 to RM1,500 — not very much lower than today's starting pay — but he definitely had greater purchasing power.

In addition, cheaper cars and houses — one could find a double-storey house for RM60,000 to RM80,000 in many areas in the Klang Valley then — meant lower loan commitments. The disposable income of a graduate was much higher.

Those were the days when the nation was just an assembler of foreign cars. Later, we decided to venture into the unknown territory of heavy industries to become a car manufacturer, in a bid to emulate the economic quantum leap of Japan, South Korea and Taiwan.

Proton, the national car maker, was incorporated in May 1983. By July 1985, along with the lesser-known Japanese car manufacturer Mitsubishi as a partner, the nation's pride — the Proton Saga — was launched at an entry level price of RM17,800.

The price was competitive initially but the national car manufacturer needed to be protected so that it could gradually grow into a regional and, perhaps, global player. An almost sure way of protecting Proton was to increase the duties of its competitors, hence the introduction and imposition of a high excise and sales tax regime for locally assembled foreign cars and fully imported vehicles.

Proton's low-end Saga 1.3, priced at RM38,000, is among the cheapest cars in the country, but still costs more than double what it did when it was first launched.

But wages have not doubled for many, let alone increased five-fold during the same period. Salaries have remained relatively low for the majority of the population, with about 70% of households in the country earning below RM3,000.

As public transport — which is in the midst of an extensive upgrade — is still inadequate, many are still forced to buy a car. Dollar for dollar, the prices they have to pay are among the highest in the world.

So, it is not surprising that Malaysians spend a substantial portion of their disposable income on monthly car instalments and maintenance. That is a high price to pay — 20% of the RM581 billion in household debt is due to cars, the second highest percentage after housing loans.

It was thus not surprising that when the opposition coalition, led by PKR, proposed a massive reduction in excise duties, many supported the move, which would result in lower car prices, lower monthly instalments and higher disposable income.

Ruling party members called it an election gimmick and warned that such a move would result in the loss of RM7 billion in revenue, which is much needed by the government as it has been running a budget deficit for the last 14 years.

Proton will lose a lot of money, a lot of jobs will be lost and the second-hand car market will stall, the critics claim. In short, they say, the proposal will not be viable and cannot be implemented.

Yes, any reduction or removal of duties, if not replaced with new or higher taxes elsewhere, will directly decrease the government's revenue. However, all is not lost if a cut in duties results in higher disposable income for many.

The loss in revenue can also be compensated through a further revamp of the approved permit (AP) system for imported cars, which has been consistently abused in the past. AP documents, which cost nothing, were traded among bumiputera and non-bumiputera car dealers for up to RM40,000 each.

Now, the government has imposed a RM10,000 fee for each AP but a further increase would not hurt those who can afford imported vehicles — the rich and upper middle class.

An open bidding system that has been recommended would give the government higher revenue.

As for Proton, it will not be on the losing end as the prices of its products will also drop and remain the cheapest in the country. Cheaper cars mean a bigger market. That will also get Proton ready to compete in a more liberalised domestic, regional and international market.

The message to Proton should be that if it cannot compete domestically and internationally after 30 years of protection, then it can never be ready to compete even if it continues to enjoy such a privilege for many more years.

Many people feel a gradual removal of duties is doable immediately and this will allow the used car market to adjust accordingly.

In the past few weeks, there has been a lot of debate on the pros and cons of this issue. But after all is said and done, the one inescapable conclusion is that we do deserve cheaper cars, plain and simple. Azam Aris is managing editor at The Edge. This story appeared in The Edge on Aug 6, 2012.

3. What is the Selangor State Government’s proposal for a holistic restructuring of the water industry?
o The Selangor State Government is proposing that it would take over the assets of the concession companies, and also pay them their invested equity at a rate of 12% return on investment. This amounts to RM5.7 billion (RM4.6 billion worth of assets and RM1.1 billion worth of equity)
o After this, the Selangor Government would transfer RM4.6 billion worth of assets from the concession companies and RM9.7 billion worth of its own State water assets to PAAB.
o The Selangor Government would then receive RM14.3 billion in cash and bonds from the Federal Government from the sale of water-related assets.
o A special-purpose vehicle would be set up as a corporate entity to consolidate all the four companies together. The State Government owns shares in some of the companies and hence by virtue of these shares would be able to exercise significant decision-making in the consolidation.
o The special-purpose vehicle would apply for an operating license for the water industry in Selangor, leasing the water assets now owned by PAAB to operate at the State level.

4. Why is it important for the restructuring to take place as quickly as possible?
o It is important to expedite the process of restructuring because under the concession agreement, Syabas can increase water tariffs by up to 70%.
o Even if the Federal Government, after giving the operating license back to Syabas (which the Selangor State opposes), decides not to increase the tariffs, the difference will be borne by the State Government and in turn by the people of Selangor.

o The Selangor State Government has submitted its proposal for the Minister to consider carefully, in the holistic restructuring of the state’s water industry and awaits its feedback.

o If all else fails, the Selangor State Government will have no choice but to take legal action against the Federal Government.
Posted by LAU WENG SAN at 10/16/2012 05:28:00 pm No comments: 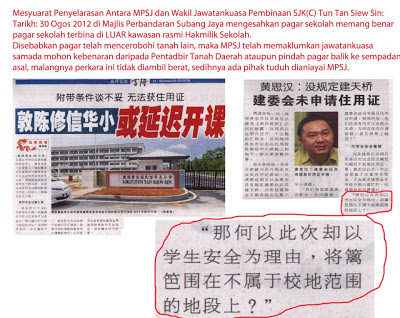 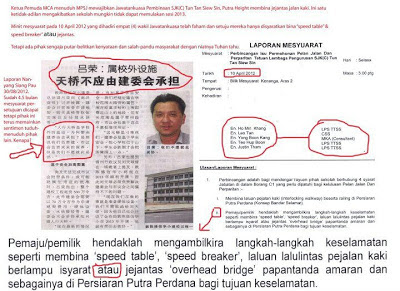 我呼吁这些马华领袖尤其是身为副教育部长的魏家祥停止以双面人的把戏来掩盖本身的弱点。尤其是在丘晒园华小迁校事件之中，汝来市议会也是以同样的作业标准来审核有关兴建新校舍的申请。
Posted by LAU WENG SAN at 10/12/2012 04:57:00 pm No comments: 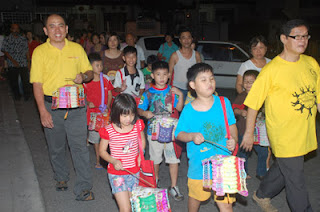 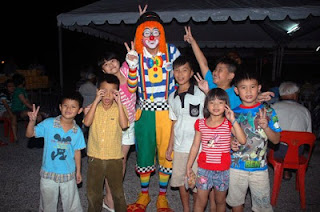 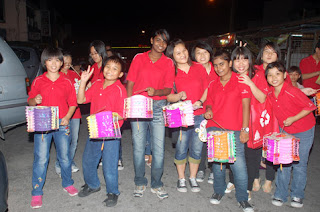 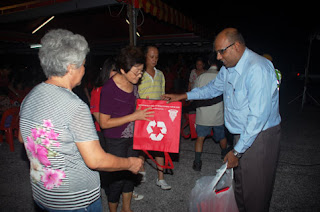 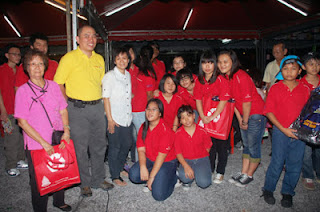 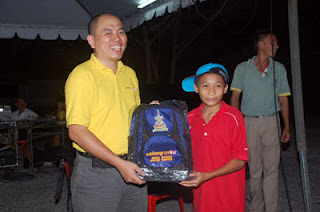 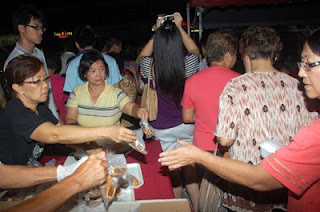 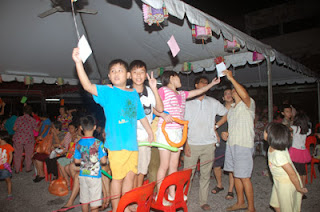 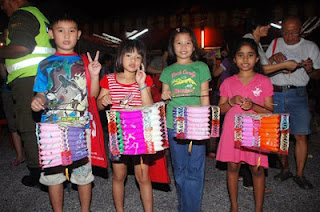 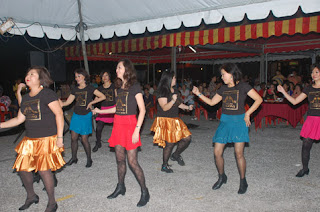 About 600 people turned up at the event to enjoy the various activities lined-up which included line dance performance and a lantern riddle contest.

“This event is held to bring the surrounding community together to celebrate the Mid-Autumn festival that show harmony and unity, especially the children who otherwise would have stay home play online games,” said Lau who used his state constituency allocation to fund the event.

Lau thanked the developer SEA Housing Corp. for use of the car park for the community event at no cost to his office.

MBPJ councillor (zone 19) Jeyaseelen said the event was held to foster closer rapport and strengthen unity among the multi-racial residents. He later handed out free reusable bags cycle bags to the residents to encourage them to use the bags every time they go shopping.

The event brought smiles and cheers to 35 children from Prudential Children Welfare Home. They were seen enjoying the fun of eating mooncakes and lighting the lanterns and walking around the streets during the lantern walkabout.

Also present at the event were representatives from Rukun Tetagga Seksyen 20A Paramount Garden and Rukun Tetangga Seksyen 21 Sea Park.

Guests were entertained by a line dance group and treated to mooncakes and food packed in Styrofoam box of Hainanese chicken rice, nasi lemak ayam goreng and Bak Chang (glutinous rice dumpling).
Posted by LAU WENG SAN at 10/11/2012 09:50:00 am No comments: 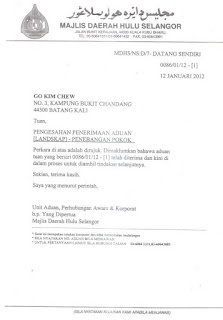 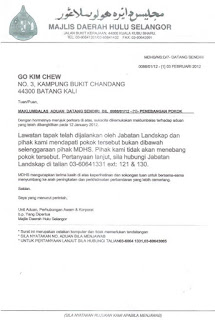 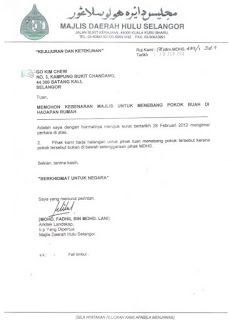 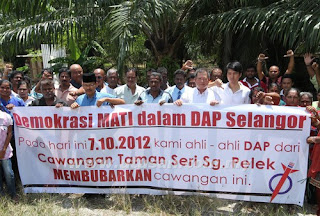 As DAP Selangor Organizing Secretary, I would like to clarify a statement made by a sacked DAP member named Tan Tuan Tat in Sungai Pelek, Sepang two days ago that a group of 400 members have resigned from DAP and seven DAP branches are already dissolved.

Under Clause 20 of the DAP Constitution, the CEC has the sole right to establish and dissolve any branches nationwide in which there are due procedure to be followed by the CEC in dissolving any DAP branches.

The remaining six branches are yet to be registered with Registrar of Societies (ROS) as we suspect that there are phantom members in these branches which is the reason of him sacked from the DAP.

Meanwhile, DAP Selangor has yet to receive the remaining 398 resignation letters. Some members from that branch has already contacted DAP Selangor expressing their will to stay with DAP and have no intention to resign from the party.

Some mainstream media also highlighted that Tan Tuan Tat was an active DAP member who has been with the party for the past 18 years. I would like to clarify that Tan Tuan Tat’s branch was only formed in 2008. Although Tan Tuan Tat was once DAP Selangor Publicity Secretary in 1996/1997, he left his position in 1997 and has since then been a dormant member until after the March 8th political tsunami.

TV3 also interviewed a person named Mahful Wahid, who claimed himself as DAP member. A check with DAP membership data in Selangor shows that there is no such name at all.

Tan Tuan Tat should stop making excuses for his expulsion from the party. He should also stop fabricating lies to cover his own weaknesses. All these accusations will only make him look bad in the eyes of the party members and public.

经过308政治大海啸之后，马来西亚人民的政治思维逐渐成熟，人民对政治人物的诚信度的要求也更高了。蔡金星和郑修强之辈反而背道而驰、背逆民意，以虚假之辞恶言攻击政敌，这是政治角力中最低俗无耻的手段。针对这类政治人物，我相信选民自然会懂得如何惩罚他们。
Posted by LAU WENG SAN at 10/09/2012 01:38:00 pm No comments: 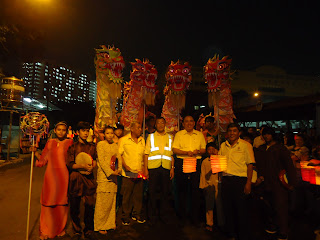 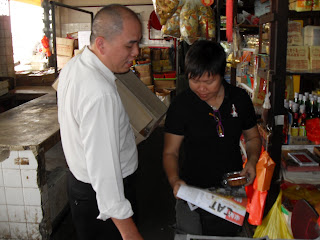 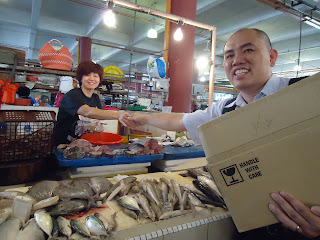 此活动是由行动党甘榜东姑区主办，八打灵再也北区国会议员潘俭伟与市议员惹也西兰将会出席。届时，民众除了能免费吃月饼，亦有娱兴节目呈现。此中秋晚宴的活动时间是晚上7点至晚上11点之间进行。
Posted by LAU WENG SAN at 10/02/2012 10:41:00 pm No comments: 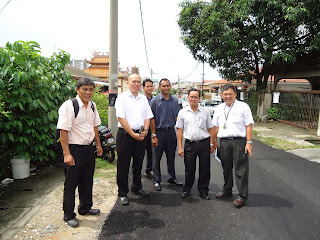 他说，市议会曾经接获村民诉承包商向居民收取铺路费用。他强调，村民是无须为原本已经是柏油路的住家门前的部分付钱，但是如果居民想要为住家与住家之间，或其他之前不是柏油路的土地铺上柏油，则须另外付费。
Posted by LAU WENG SAN at 10/01/2012 10:43:00 pm No comments: