Words For YAB Nizar: "I Shall Return" 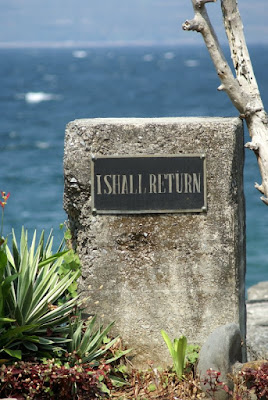 On March 11, 1942 Lt. Gen. Douglas MacArthur leaves the Philippine Islands after boasting that his men could repel any Japanese invasion. At the time MacArthur vows "I shall return." Two and a half years later, MacArther does return.

On October 17, 1944 the first American forces land on Leyte. What is left of the Japanese Navy is destroyed in the Battle of Leyte later the same month. In a four-day melee at sea, the Japanese lose four aircraft carriers, three battleships, 10 cruisers, 11 destroyers, and almost 11,000 men. These losses leave the Japanese without adequate naval forces to oppose operations in the Philippines and later operations at Iwo Jima and Okinawa. American losses amount to two escort carriers, one cruiser, and three destroyers.

On January 9, 1945 the Americans land on Luzon. Although Japanese resistance continues on Luzon until the end of the war, the key objectives (namely Manila and Corregidor) are secure by the end of February 1945.

I afraid that Pakatan couldn't retured after 2 and half years b'cos BN lead government will face bankrupcy by mid of 2010.

This mean that they'll be GE in lest that 18 months.

The Malaysia taxes revenues collection is less that 400 millions with the global financial crisis, the 2009 and 2010 taxes collection will be at record low!

Petronas could no longer able to finance the different.