"Allah" is not the sole proprietary of Islam 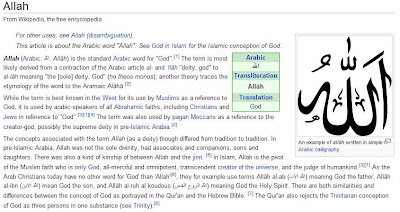 请点击上面的“谷歌广告”以示对此博客的支持。谢谢！
Please click "Google Ad" on top to support this blog. Thank you!


So now even when Pak Lah attended the Christmas Tea Party, he had not brought any solution for the Catholics about their weekly publication Herald.

Herald is denied a publication permit by the Ministry of Internal Security over the usage of “Allah” in its Bahasa Malaysia/Indonesia publication.

The Ministry has ordered the Catholic weekly to stop publication unless it withdraw entirely it’s Bahasa Malaysia section.

Meanwhile, as reported here in Malaysiakini.com, a Sabah church has sued the government and Prime Minister Abdullah Ahmad Badawi in his capacity as internal security minister for not allowing the import of Christian literature from Indonesia containing the word “Allah”.

Deputy Internal Security Minister Johari Baharum said that the word ‘Allah’ can only be used in the context of Islam and not any other religion as reported here.

Several bloggers including YB Lim Kit Siang has blogged about it, critising Prime Minister Abdullah Ahmad Badawi for not assuring Malaysians that he will not allow the middle ground to be intruded and encroached by extremists in UMNO or the civil service by striking down unreasonable, arbitrary and unconstitutional restrictions on Herald, the Catholic weekly.

Others who had blogged on this issue are Ronnie Liu, kai8994, Tony Pua, James Wong, malaysianabroad and saif2020 etc.

James Wong’s blog post is quite interesting that he put up a photograph showing a wall of a Christian Church in Syria with Arabic wordings.

While at here you can even listen Christian prayer in Arabic.

What do all this show? It just show that the word “Allah” is just a term used to describe god (or God or Gods) by the Arabians. It will not become the sole proprietary of Islam just because the Quran was originally written in Arabics.

Wikipedia has a better explanation on the word “Allah”:

Allah (Arabic: الله, Allāh) is the standard Arabic word for "God". The term is most likely derived from a contraction of the Arabic article al- and ʾilāh "deity, god" to al-lāh meaning "the [sole] deity, God" (ho theos monos); another theory traces the etymology of the word to the Aramaic Alāhā.

While the term is best known in the West for its use by Muslims as a reference to God, it is used by arabic-speakers of all Abrahamic faiths, including Christians and Jews in reference to "God". The term was also used by pagan Meccans as a reference to the creator-god, possibly the supreme deity in pre-Islamic Arabia.