Chew Mei Fun - wheelchaired but still not easy for DAP 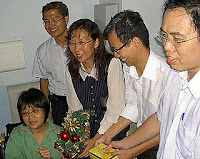 请点击上面的“谷歌广告”以示对此博客的支持。谢谢！
Please click "Google Ad" on top to support this blog. Thank you!


DAP today went to visit YB Datin Paduka Chew Mei Fun, MCA MP for PJ Utara and Parliament Secretary of Women, Community and Family Development Ministry. The DAP team was led by DAP MP for Seputeh, YB Teresa Kok, who is also a woman MP, Tony Pua and I. Both Tony Pua and I are working for the same constituents with YB Chew in Petaling Jaya Utara. While Teresa and Chew were alumni from Kuen Cheng School. 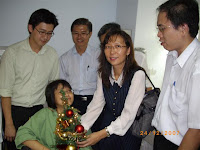 When I received a call from Malaysiakini indicating that they will be coming to cover the event, it is a bit surprising for me. Malaysiakini is not the media that will only report about DAP visiting Chew, as it is a media that will report what your and my eyes cannot see, as you can read from here. Well, it has been the tradition of DAP leaders to visit MPs, government officers or even Ministers even though they are from different political parties. So Malaysiakini might have seen a bigger picture?

Well, it has always been the DAP to visit the unfortunate political opponents when they met with an accident or any relatives of them passed away. For example, our leaders visited former Home Minister Megat Junid when he was admitted into hospital a few months ago. Our leaders also paid numerous visits to Dr Mahathir when he was being treated in National Heart Institute (IJN).

DAP leaders also paid our last tribute to the late mother of YB Datuk Seri Ong Ka Ting in Damansara when his mother passed away years ago.

Of course, Malaysiakini and other presses might be very interested on our purpose to visit YB Chew. I think, though we are working in the same constituency on a totally different political platform, there are times that we do not have to cut the line so clear between MCA and DAP. I had even issued a statement immediately after the accident to wish her quick recovery.

I admit that it will be a tougher fight for us in PJU for the coming GE especially when YB Chew is injured as she will probably rope in some sympathy votes, but I think a fight is still a fight. I do no have personal bad-feeling against her, so does Tony, but when we come to national issues, issues of principle and political stands, both Tony and I with YB Chew are totally different.

We have never undermined YB Chew’s capability, more so when DAP lost badly in PJU during the last election, something which we had never expected. So there is really no credit for us to assume that it is an easy fight in PJU.

With this in mind, how can we afford to undermine her even when she was on wheel chair?