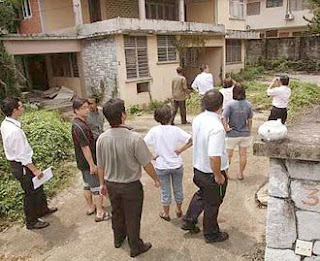 A VACANT lot in Jalan 22/51, Petaling Jaya, has become a hiding place for drug addicts and even snakes.

Rosie Tan, a housewife who lives in the area, said drug addicts seeking refuge in the abandoned vacant lot were breaking into houses and making away with valuables.

The hoarding at the vacant plot of land is also on the verge of collapse.


A hideout for drug addicts: An abandoned bungalow in Jalan 22/40, Petaling Jaya, is also a cause for concern.

Tan also said the manhole covers in the area had been stolen and replaced with ones that were six inches higher than the road level.

“The raised manholes have made the road inaccessible to small vehicles and even the police have found patrolling the area difficult,” she added.

Engineer Jasbir Singh said his house had been burgled twice and his car broken into once and the culprits had escaped through the vacant plot at the back of the houses.

He said he had made several reports and also brought in a witness to help with the investigations but no arrests had been made yet.

“Three petitions to build fences at the back of the houses have been sent to Petaling Jaya City Council but they somehow keep losing the petitions,” he said.

Residents have also complained about snakes making their way into their houses.

Tan said the developer had changed so many times that they no longer knew who to contact to ensure that the lot was kept clean and tidy.

“We are also living in fear of a dengue outbreak in the area,” she added.

A missing gate also makes a cemetery nearby a popular hideout for drug addicts.

Housewife S. M. Yuen suggested that the police use the Rukun Tetangga pondok as a beat base as it was underused and it would be easier for the police to serve the community of Section 14 and 22.

Email ThisBlogThis!Share to TwitterShare to FacebookShare to Pinterest
Labels: PJ

I stay in the area, a few months ago someone broke into my car trying to steal my Touch & Go smartag. The tag wasn't in the car but they scrapped of the tag holder from the windscreen.

Everytime I drive pass the house, its empty and looks very run down.

As for the Rukun Tetangga beat base, I have never ever seen anyone use it before.

Another thing YB can look into is the current developement status of the plot of land in front of the seksyen 22 Rukun Tetangga beat base. Last we heard, it was supposed to be a bungalow lot developement. However, the access road would be the backlane of current houses there.