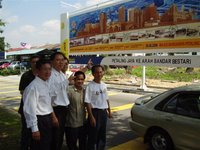 Although MBPJ is facing strong criticism from the residents on issues related to how the council handles billboard concessionaire in PJ, there are still several new billboards sighted around PJ recently. Some of the billboards are occupying pedestrian walkway and is too close to main road, which are not only endangering public safety but also not in accordance to a city built based on “safety city concept” which should be “people-oriented”.
One of these billboards is a billboard located along Jalan Universiti, Petaling Jaya, in front of Sin Chew Daily News Head Office, which is cnstructed by Spectrum Marketing Sdn. Bhd. with MBPJ approval serial number “MBPJ 78873”. 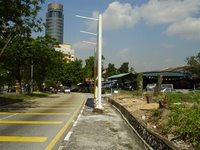 Although this is a billboard only erected months ago, there are apparently still no lighting facilities installed for the billboard, thus raising question of whether the billboard had already gone through tight scrutiny. (pleas refer to photos attached).

Normally, when an advertising company wishes to set-up billboard in any area, the company needs to apply for an advertising permit from local council and sign an agreement to build billboard in which the company is required to pay a certain amount of licensing fees. The contract will normally outline the rules and regulations the company has to follow but unfortunately such crucial document is not always available in the public domain, causing difficulties to identify what are the rules and regulations that had been breached as well as difficulties to identify any malpractices of the council.

As for the billboard mentioned in Jalan Universiti, it is certainly a billboard not only suspected to have violated the rules but it is also a billboard constructed on pedestrian walkway. For example, there must be a certain safety distance between the board and the roadside, in which in most cases in PJ, the distance shall be around 3 to 5 metres. Unfortunately, if we have a check on the board, it is basically erected just next to the road. What is more annoying is that the board occupies pedestrian walkway, causing difficulties for pedestrian especially senior citizens and handicapped.

It is our concern that MBPJ seems to continue with its on-going planning to build more billboards while the questions raised by the people remained unanswered. In the mean time, some unknown but irresponsible companies are trying to buy time to build new billboards. We believe that MBPJ should exercise careful securitization whenever there are new applications to construct new billboard in the city.

Therefore, we would like to put forward our three demands to the mayor, which we wish:
1. the Mayor to come out with an order to stop constructions of any new billboard in PJ until there is an accountable, satisfactory and acceptable official explanation given by the council in order to prevent irresponsible outdoor advertising companies from constructing billboards that endanger public safety.
2. the Mayor to draw up a policy for a dialogue must be conducted with the residents before any billboards are constructed in any area.
3. since the Mayor has claimed that the council had demolished some illegal billboards in PJ, we would like the Mayor to report weekly on the numbers, sizes of the billboards as well as the names of the companies which own the billboards in order to uphold transparency and good governance.

Meanwhile, we would like to announce that the DAP PJ Action Team is in the process of collecting billboards which are affecting public safety in Petaling Jaya. We welcome any information provider to contact either me (016-3231563 / 03-79578127) or Ronnie Liu (012-2013656), regardless of whether the billboards are legal or illegal.